Oil Refineries are machines used to convert oil into fuel. Oil can be pumped into the machine using waterproof pipes or be placed inside with buckets. Fuel produced by the machine must be pumped out with a powered wooden waterproof pipe. The conversion rate of oil to fuel is 1:1, however considerably more energy (19x in BC2.2.14) can be extracted from fuel so refining is highly recommended.

A refinery has three small internal tanks: the rear two are for oil and hold up to 8 buckets; the front one is for fuel (the output of the refinery) and holds up to 4 buckets. Ocasionally you may find water in the back tanks if your pump has drawn in water. This will stop the refinery working, and it will need to be picked up and replaced wasting any stored fuel.

Simply connecting two tanks to the output of your pump, and putting one bucket of water into one tank and oil in the other will cause unwanted water to be removed into the tank. Pump the oil from the oil tank into the refinery with a redstone engine and wooden waterproof pipe.

Breaking a refinery with your hands will destroy it. Use a stone pickaxe or better to get it back. 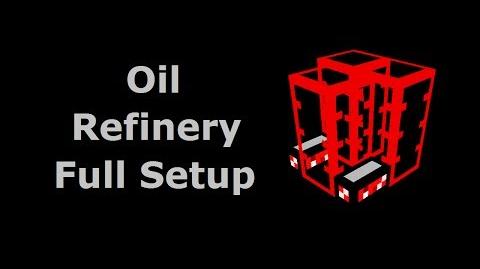 Refineries use a lot of energy, so it is probably best to supply it using Conductive Pipes. They require several Combustion Engines powering them at the same time to run at a reasonable rate.

Information on engines energy production can be found on the Energy Quick Reference page.

As a refinery is running, two small pistons on its left and right will move up and down. The faster they move, the faster oil is being converted into fuel. The pistons will be of different colours depending on the refinery's speed and effeciency; red being the slowest and green being the fastest setting.

In more recent versions of BuildCraft Oil Refiniries are now called Distillers, which turn oil into Heavy Fuel Oil (Dark Yellow) and Gaseous Fuel Oil (Light Yellow.) A wooden fluid pipe must be placed on top of the distiller to remove the Gaseous Fuel Oil, and another placed on the bottom to remove the Heavy Fuel Oil, if only one is placed the distiller will work until one of the two reservoirs is full and will then stop working until the reservoir is emptied. You may need to reset the engines to restart fuel production (simply replace the redstone signal.)

If broken the Distiller will drop Fragile Shards for any liquid that was inside of the machine, these shards can be put into a tank exactly like buckets can.

Community content is available under CC-BY-SA unless otherwise noted.
Advertisement